Chapter 3 Venice: Discovering the wardrobe of the ancient nobles 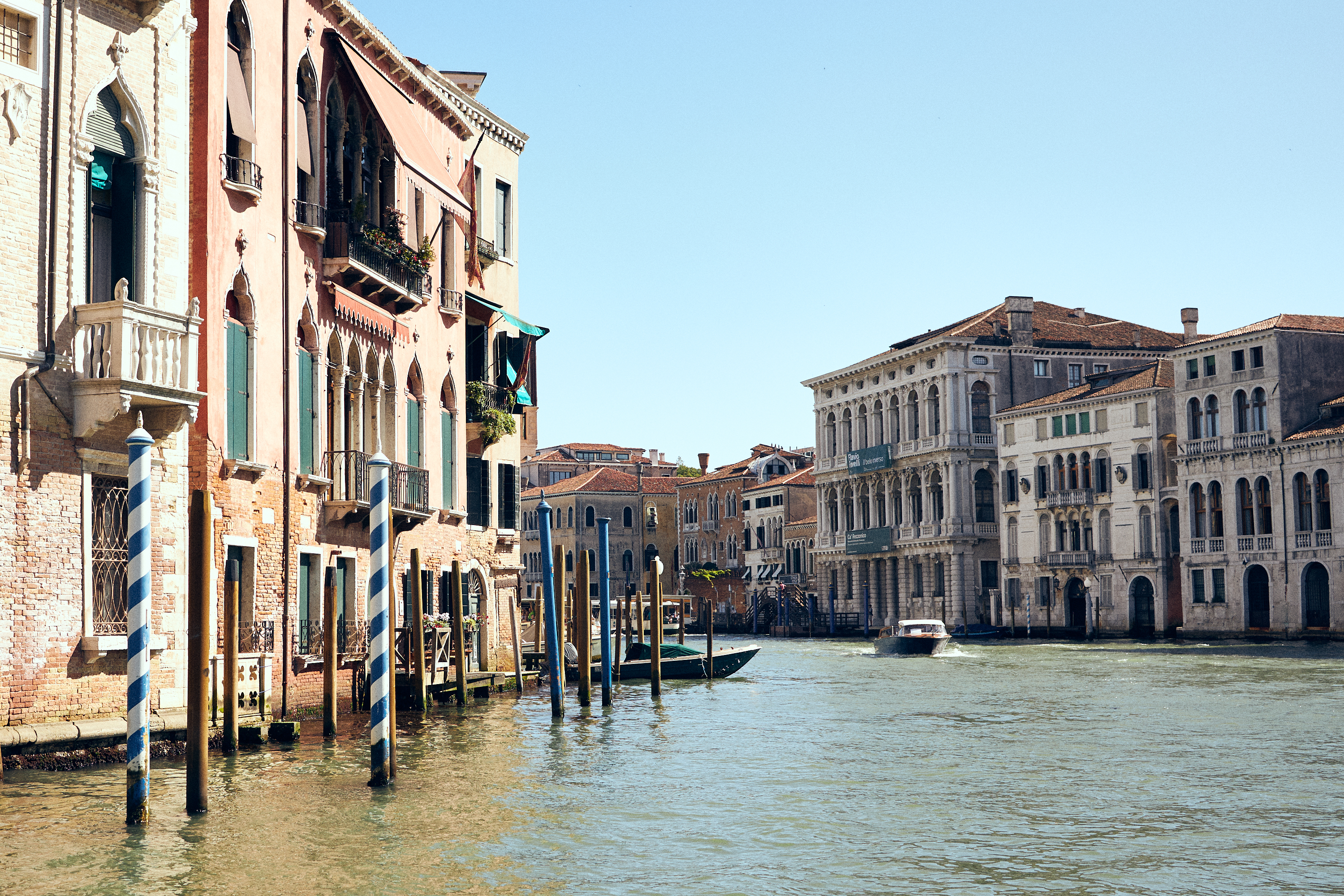 Since as early as the 9th century, artistic maestros and great thinkers from the Orient and beyond, have passed through fog-laden canals of Venice. Known for its trade and textile commerce, which joined the East and the West, Venice flourished in the 13th century when Marco Polo opened the silk route, an era that would mark the city’s real Renaissance. Polo’s expeditions introduced the West to porcelain, pearls and other precious stones, mineral dyes, peacock feathers and brocades from the East, which further enriched the Venice’s artisan craft… which is why our travels have led us to Venice’s gothic nooks and crannies. “Decadent and extraordinary, more grand and unique than any other place in the world… Venice has attracted in all its charm, artists, poets, writers from every corner of the world,” said Helen Nonini, our brand ambassador, as she set out to explore some of the city’s historic workshops and boutiques that serve as torchbearers in perpetuating a lavish, ornate aesthetic that is unmistakably Venetian. Helen first stop is a legendary local tavern called Cantine del Vino Gia’ Schiavi, for un’ombra de vin and some chicchetti (a glass of wine and some light snacks that satiate one’s appetite). 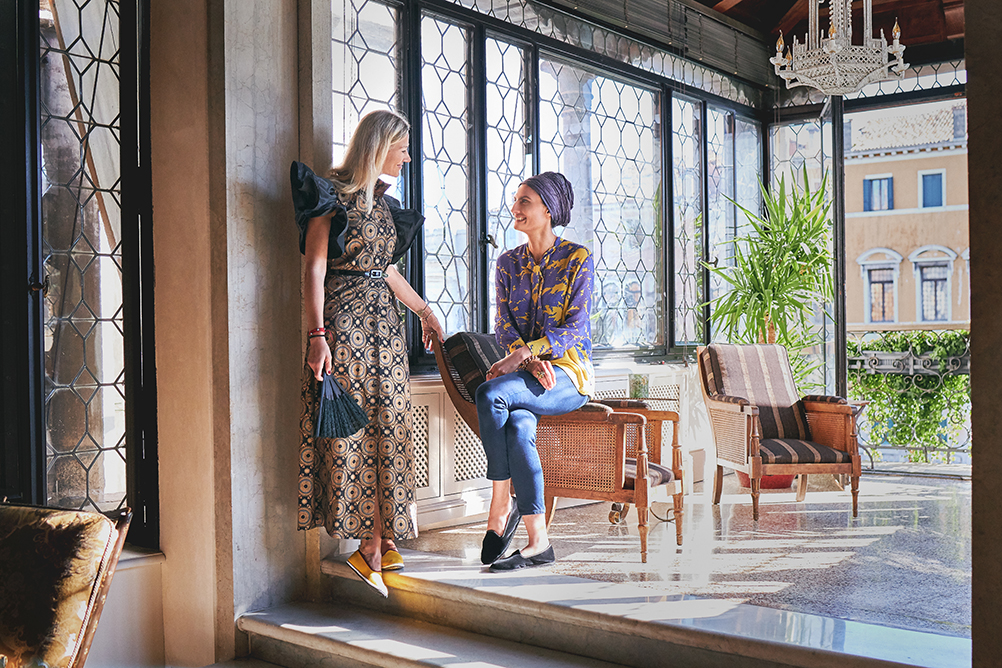 The fashion maven later crosses the Accademia bridge to the San Marco district, where she meets Servane Giol, a French-born Venetian, who resides in a breathtaking gothic palace. Giol, the founder the Falier theatre company, surrounds herself with a milieu of fashion and art aficionados.  The tall, elegant blonde embodies the sort of effortless, iconic fashion sense that is associated with living in a city like Venice, the epitome of Italian style as we know it. Draped in a luxurious golden print Stephan Janson shirt dress, accented with puffed sleeves, Giol tops off her look with matching golden Vibi Venezia furlane cotton slippers, as she leads Helen, dressed in a Mantero 1902 shirt in a light and sophisticated double crépon silk, through her waterfront property. Known for its vast textile archives, Mantero, a historical Como-based Company estabilished in 1902, is also known for its high-end clientele, its luxury collaborations, and its own accessories and pret-a-porter collection.

Vibi Venezia was founded by the Arrivabene sisters, fashion icons in their own right. Their furlane slippers have captivated the fashion set via a captivating social media strategy that features a privileged view into their upscale Venetian lifestyle. Their slippers pay tribute to Venice’s rich history, culture and traditions.  The furlane are said to be the preferred shoes of the city’s gondoliers and were also a staple item in the wardrobes of a generation of Venetian nobles are said to have  used them to sneak around their cavernous chambers in silence.

Today, Helen, donning a pair of furlane in black, chats with Servane by her oleander-studded garden overlooking the same ancient spires and domes that inspired great thinkers like Marcel Proust and Renaissance poet and scholar Petrarch, who lived in Venice for five years, and who dedicated his most beautiful verses to the city (‘city of gold, full of honour, strong of virtue’).  “Venice is a dream that everyone should experience at least once in their life,” Helen said. At this point, the fashion duo adds Mantero 1902 silk handbags to their Venetian wardrobe.  Helen opts for a sporty clutch with a superb oak handle, while Servane opts for the Mantero 1902 Carré bag in silk and leather, which is the silk maker’s modern interpretation of the traditional foulards that are the cornerstone of the company’s heritage.

Servane slips into some Gia Couture “Eva” slingback adorned with two animal print bows, as the two, cocooned in their Venetian finest, navigate enclaves like Sestiere Dorsoduro, which host more ateliers and art galleries than any other Venetian neighbourhood. 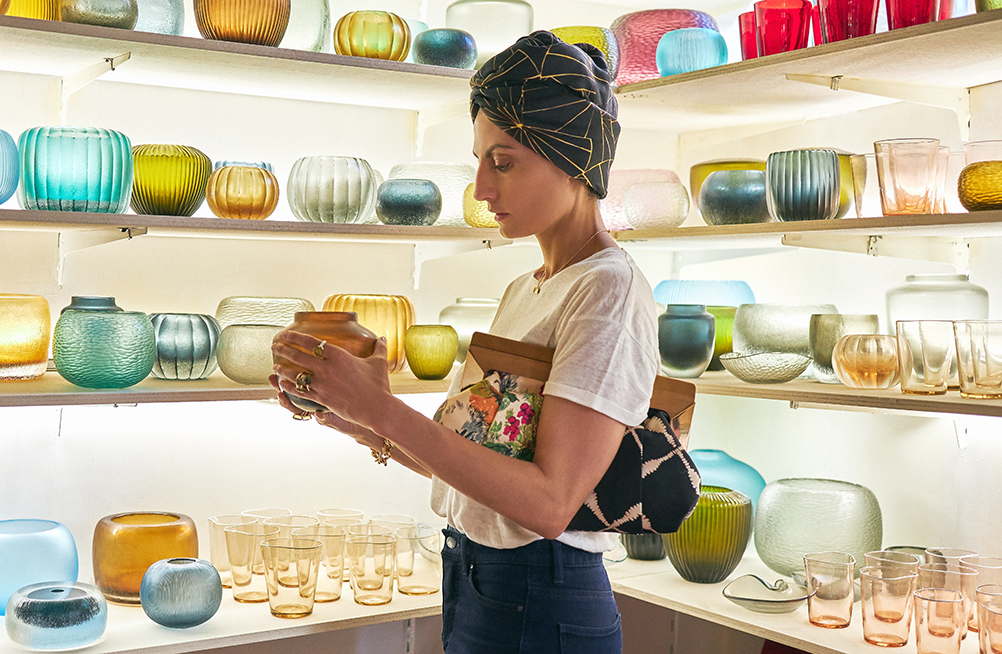 While exploring the Rio di San Trovaso, Helen discovers the atelier of the Micheluzzi sisters, who, guided by the legacy of their father, Massimo (a famous designer and glass artist) sell one-of-a kind pieces made by Murano glass masters. Their creations are crafted through a centuries-old torching and mouth-blowing technique.  Their whimsical shapes and colours mirror the deep hues and the imagery of Venice’s canals.

Relishing in the absence of cars and all of the frenetic madness associated with a typical European city intertwined with polluted roadways, Helen abandons herself in the “enigma” of Venice.  “It’s caught somewhere between a fairytale  and a trap.  One needs only to abandon themselves in this type of atmosphere,” Helen said, adding that she will definitely take in the more modern Venetian spots like the Peggy Guggenheim collection located in the Palazzo Venier dei Leoni, which was also the property and residence of the eccentric and unforgettable Marchese Luisa Casati, who lived there between 1910 and 1924.

The Marciana Library, which is situated in the old Venetian Palazzo della Zecca, is another must-see, she said.  Founded in 1560, the San Marco public library is home to over one million volumes.  Helen rarely visits Venice without stopping at the Accademia Gallery to marvel at Tintoretto’s “The Miracle of a Slave” which he painted at 29 years old.  With this painting, the notable exponent of the Venetian art scene, made his mark in the Higher School of San Rocco, a place, Helen noted, is “the best place to actually view Tintoretto’s work — not because other places are less important but because this building represents the apex of his artistic career.” 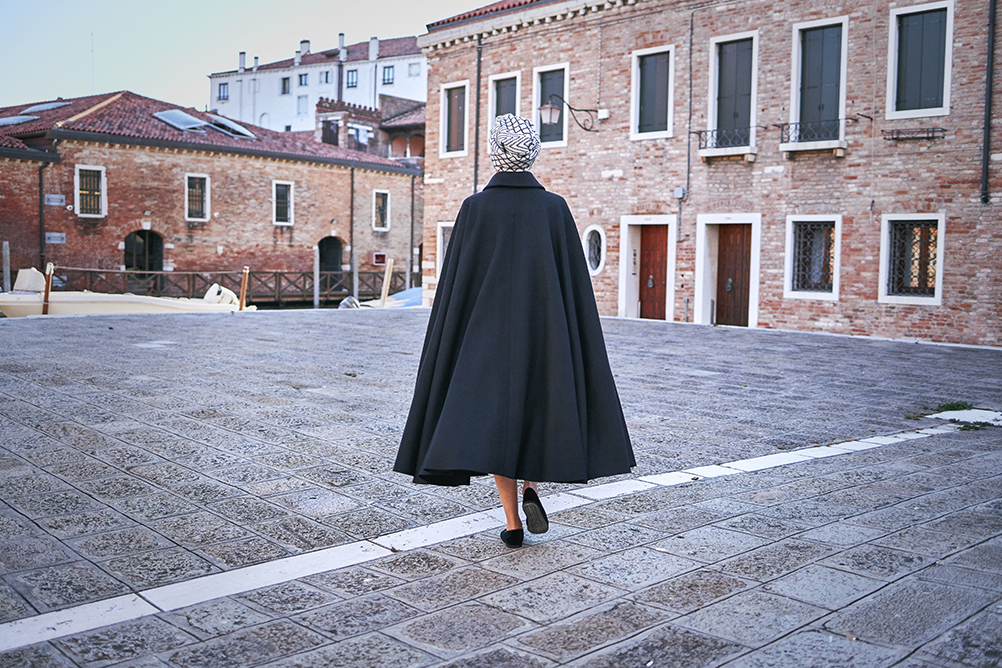 After admiring Tintoretto’s bold and furious brush strokes, Helen makes her way to Monica Daniele’s shop, just a few steps from Campo San Polo.  In addition to Venetian gondolier hats, Helen stumbles upon the quintessential Venetian garment, the elegant Tabarro cape.  Like the furlane slippers, the Tabarro, has also dressed generations of Venetian nobles and was exported throughout the courts of Europe by Giacomo Casanova.

Helen finds the perfect one and can’t resist the temptation to put it on and get lost in the aged, brick-lined pathways of one of her favorite cities.

Discover Helen’s Favourites
Discover more about Behind The Dressing Screen with H. 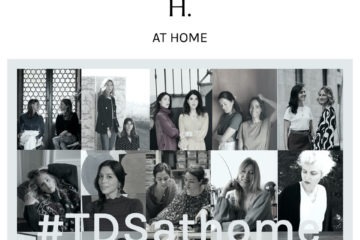 The Dressing Screen with H. at Home